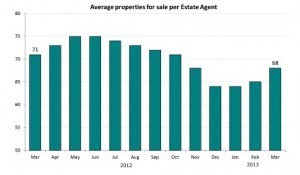 House-sellers have raised the average asking price by 2.1pc to £244,706, setting a new record for this time of year, according to the Right move property website. Prices have risen by £15,717 since the start of the year, and are just £1,500 behind June 2012’s record high.

The gap between householders’ asking prices and actual selling prices has also narrowed, as buyers find it easier to get loans, while there are also more would-be buyers.

The biggest jump in house prices was in East Anglia, where the typical asking figure jumped 4.4pc to £224,538.

London was the only region to see a fall, although even with a 0.5pc drop to £493,635, house prices in the capital were still more than 6pc higher than they were a year ago.

Miles Shipside, director of Rightmove, said: “With London prices pausing for breath this month but likely to bounce back next, May looks like an odds-on bet to deliver a new asking price record.

“This should not be confused with an overall market recovery, as while spring may be here the ongoing chill of the recession is still in the air.

“However, it is true to say that more estate agents are reporting more activity in more segments of the market.”

The website said that the run of houses coming to market in April was 4 per cent down on a year ago. Homes are spending around 73 days on the market before they are sold, which is 10 days less than in April 2012.